October was an exciting month for all Canadians. We had our first change in federal leadership in nearly a decade—and with this, a potential shift in our government's priorities regarding freedom of expression.

Here at CJFE, we welcomed Al Jazeera journalist Mohamed Fahmy back to Canada, campaigned for Access to Information reform, and continue to plan our 18th annual CJFE Gala: A Night to Honour Courageous Reporting. 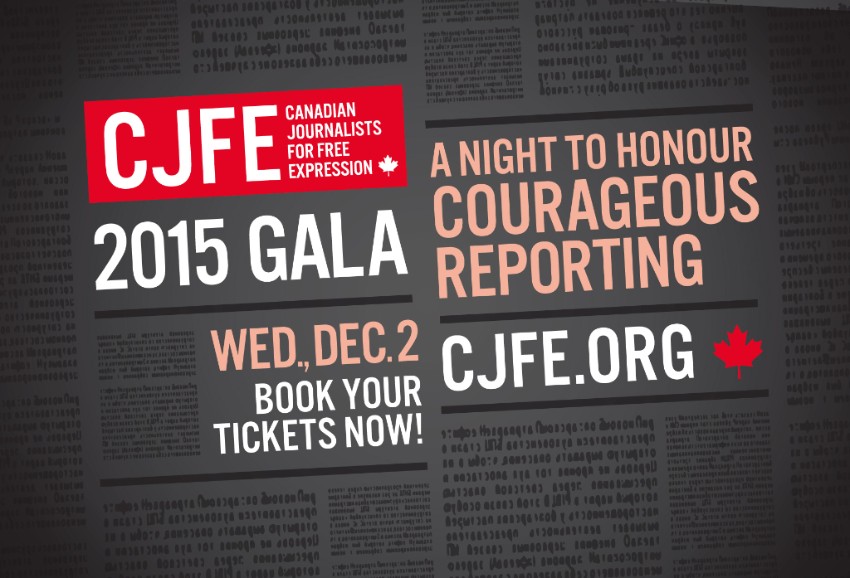 Haven't bought your tickets for the Gala yet? It's not too late! However, the seats are filling up quickly, so it's best to act fast while they are still available.

Entrepreneur pledges $1 million to fight Bill C-51
We are delighted that Canadian technology entrepreneur Frederick Ghahramani is pledging $1,000,000 to fight Bill C-51! The money will go to front-line organizations leading the effort to repeal the legislation, including CJFE, the Canadian International Policy & Public Interest Clinic (CIPPIC) and OpenMedia.

CJFE's new Fellowship launches
Erin Millar, co-founder of Discourse Media and recipient of the inaugural Bob Carty Free Expression Fellowship, is breaking down barriers between the media and underrepresented communities. The project was inspired by Nancy Macdonald's article Welcome to Winnipeg: Where Canada's racism problem is at its worst.

#ATIreform: Ferreting out information from CSIS
This month, Justin Ling of VICE Canada told us about his experience sending Access to Information requests to the Canadian Security Intelligence Service (CSIS), which, according to Ling, is "roughly like howling at the moon."

2015 Federal Election Platform Report Card
In the lead up to the October 19 federal election, CJFE released a report of the major parties' platforms and actions on free expression issues. See where they stand on privacy, muzzling of scientists, Bill C-51 and more.

Campaign for #ATIreform
In September and October, you joined CJFE and a coalition of other organizations calling for Access to Information reform in Canada. We made this an election issue for Canadians, and we now hold our new government accountable for the task. Follow us to stay updated on the campaign!

Free Expression Around The World

Bahrain
October 7th marked the 200th day of hunger strike by prisoner of conscience Dr. Abduljalil al-Singace, who has boycotted all solid food in protest of the treatment of inmates at Bahrain's Central Jau Prison.

Burundi
A Burundian cameraman and his family were murdered during tensions following the re-election of President Pierre Nkurunziza. The press freedom situation across the country continues to deteriorate, with targeted killings and a crackdown on government critics.

Egypt
At least three journalists were arrested in the last week of October. They are among hundreds of people kidnapped or arrested and held in undisclosed locations by security forces in Egypt in recent months.

India
Television journalist Hemant Kumar Yadav was shot and killed while travelling home from market on October 3. No arrests have been made, and India remains one of the most restrictive countries in the world for journalists.

Turkey
VICE journalist Mohammed Rasool remains behind bars, after he was spuriously charged with 'working for a terrorist organization' in August. Rasool is one of 23 journalists currently imprisoned in Turkey.

We depend on our supporters like you to continue our work defending free expression and freedom of information. We couldn't do it without you!

Also in this section: